I was dragging my feet to write my race report for IM Frankfurt. I didn't particularly want to re-live the experience, but since I do want to write about my next two races, I forced myself to write this one.

So, here is the full report from the Team Timex blog.

In addition, here are some tips if you are actually doing the race:

1. Think carefully about the logistics of getting yourself and your supporters to the starting line on race morning. I elected to take the bus solo and my husband and friend rode down to the lake, where I saw them as I headed to the swim start. Even though I got on the bus with plenty to time, we got stuck in some bad traffic on the way to the lake and it seemed to take forever. Plus, I was sitting in the back, right by the engine, so all of us were getting very hot and sweaty. Then I was too rushed in transition. There were pumps available, but the lines for them were long and I wasn't familiar with how the valve worked. If I had to do it again, I would have left even earlier and brought my own pump.

2. Pack the stuff you want for the athlete's garden in your white pre-race bag and turn it in. They will deliver it to you within 5 minutes of finishing. It was so awesome to be able to put on my flip flops immediately. There is a shower trailer in the athlete's garden, so pack accordingly. I put some travel size toiletries and a small towel and comb in my post-race bag and that was a great idea.

3. Make sure that your rear bottles are super secure. A lot of people assume that they will have problems when they get to the cobbles in "The Hell." Since there is a bottle station right after that, it seems like it shouldn't be a big deal. However, I saw more people lose bottles in the pothole section in Frankfurt (about the 16km mark) than I did on The Hell. So before the race, find the roughest road you can and check that your bottles stay in place. This is also great practice for the cobbles....

4. Double bagging transition bags. Since it was supposed to rain after we had turned in our bags, I made sure to put all my things inside a trash bag, tie it closed, then put that in the T1 and T2 bags. This would up being a great idea even if it hadn't rained. In the change tent, I could pull out the trash bag and immediately the other bag would be free to hold the stuff I was taking off. I think I'm going to do that for all future races with bags for transition.

5. The bike course has permanent direction signs, so it is easy to pre-ride the course. However, there is usually a lot of traffic as well as stop signs and intersections. I would suggest riding it on a Sunday morning if possible. Don't even bother with the sections within the Frankfurt city limits - you'll probably be forced onto the sidewalk.

6. When you heading into T2, there is only about 200m left after you make the right hand turn to leave the loops. So if you're taking off your shoes, do that before you turn. The guy in front of me waited until right before the dismount line, so I had to avoid him swerving around.

7. If you are looking for a Kona slot and you are a woman...pick another race. They advertise 100 slots for this race, but since they are based on the demographics of the starters, there were only 13 slots for the entire women's field. My AG had 2 initially, but we got a third when one of the older age groups didn't take it. 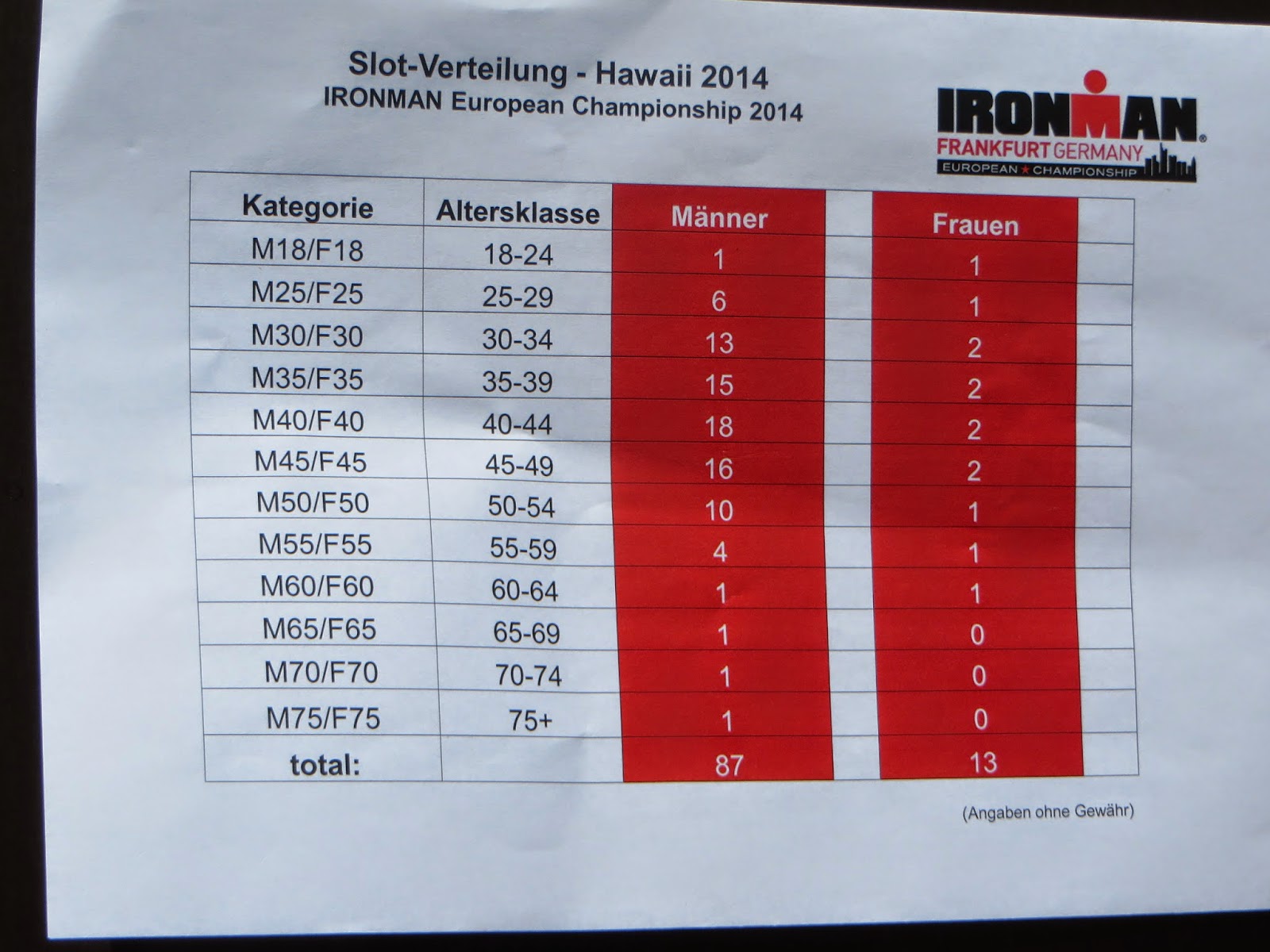 I am trying to think about something to say about the run...the one major thing is that you can run on the course without issue all year long. In my pre-runs, I thought that some of the sections would get lonely, but that did not happen on race day. Also, most of the crowd was cheering for everyone and just their racer, so there was plenty of motivation.

Overall, I thought the race was very enjoyable and well organized. The crowd support was unbelievable and made the bike course so much fun. All in all, an amazing experience that is hard to replicate! Hopefully in time, I will remember all the good parts and not how worn out I was at the end.
Posted by AP at 5:04 PM No comments: