This is going to be really short, mostly because I don't have a lot of stuff for transitions.

I put my bike in the rack by the back wheel or nose of the saddle.  I lay out my cheapie red small towel to the right of the front wheel.  My bike stuff (shoes, number belt) goes at the front edge.  My run stuff (shoes, maybe socks, hat, Garmin, maybe a gel) goes in the 2nd row.  Helmet and sunglasses go onto the aerobars.

All my stuff goes into my backpack I got from the Austria 70.3 race.  It has a bunch of pockets, but I make sure to load it so that I can unload it quickly.  All of the "probably won't need" stuff like bike tools, extra goggles, etc. goes in the nether-regions of the bag.  I even made up a written packing list with instructions of what goes in every pocket.  Military folks would call this a load plan.

I'll talk more about my checklist and timeline later when I talk about executing the transition.

I would advise people against the following:

Email ThisBlogThis!Share to TwitterShare to FacebookShare to Pinterest
Labels: Transition

Here's the stuff I currently use, along with some of my notes and ideas.  Enjoy!

Goggles:  Speedo Speedsocket Mirror
I use these for both training and racing.  They are pretty dark, and I also have a lighter colored pair of goggles (different brand) in my bag as a backup.  I don't put my goggles under my cap, but these are pretty low profile and tight, so I'm not as concerned with them getting knocked off.  The only downside is that I get serious raccoon eyes that last for hours after my workout.

Wetsuit:  Foor HQ1
(I know, you've never heard of it, right?  At least that makes it easy for my husband to spot me when I'm getting out of the water.)
I got this wetsuit from triuk.com, which was one of my go-to resources for triathlon stuff in English when I lived in Poland.  They had a "rent it for the season" policy and I figured this was also a good way to test drive a wetsuit.  It fit well and I liked it, so I decided to buy it at the end of the season.  Pretty easy.
It keeps me warm, it is buoyant, and I don't feel like it impacts my stroke.  So I don't really see the need to find another wetsuit for the time being.  I can spend that money on plenty of other things.

Other swim-essential things:
1.  Plastic grocery bags.  For me, this is the easiest way to get my wetsuit on quickly.  I put the bag over my foot and then slide the suit over it, basically to the top of the bag.  Repeat with other foot and then hands.
2.  Lubricant.  No one sells Body Glide in Poland.  The grocery stores don't have Pam.  I was not going to pay a boatload to ship it to me, so instead I made my own, out of beeswax and sesame oil.  I now have enough to last probably the rest of my tri career, but it does smell a little like peanut butter.
3.  Lap counter.

(By Sportcount)
I have one of these somewhere.  I recently misplaced it and I really miss it.  It goes on your index finger and you hit the button with your thumb and since I tend to zone out, it is pretty helpful.

Since I can't find my counter, I've had to use my own methods for keeping track of my laps:  the alphabet.

For me, this is a lot easier than counting.  I always count by 50s, so if I need to do a 400, that is 8x50 and the 8th letter of the alphabet is H.  As I swim, I think of things that start with the letter lap I'm on.  It usually winds up being food (mmm!), but I've also used cities, animals, team names, etc.  This also helps to keep my mind occupied because I get really, really bored while I'm swimming.

That's about it for my swim gear.  My pool has the pull buoys and kickboards, so I just use the ones there.  There a few other things I'm thinking about buying, but I'll save those until they're in my hands.

Thanks for reading!
Posted by AP at 3:09 AM No comments:

Email ThisBlogThis!Share to TwitterShare to FacebookShare to Pinterest
Labels: Swim

(No, this isn't an idea for a new reality show.  Hmm...maybe I should pitch this idea to one of the networks.)

Everybody has some reason for getting into triathlon:  to get in shape, to challenge themselves, a bar bet, whatever.  For me, it was partially to challenge myself and partially because I had some extra time on my hands.

I had "do a triathlon" on my bucket list for a few years.  I even competed in a relay triathlon, but never actually did one myself.  It seemed like a big time commitment to train for, and I always had an excuse why I couldn't do it.

Fast forward a few years to Poland.  We had lived there for over a year, but living in a foreign country is, initially, exhausting.  We spent the first year in a language course, but then I found a teaching job while my husband worked on his graduate studies.

My job at the university was only about 20 hours a week, so I had lots of extra time to sit in my tiny apartment.  I was very self-conscious about my Polish, so I preferred to doing things that wouldn't involve a lot of talking.  I knew that I didn't just want to sit around and watch movies on the internet.  At some point, the idea to finally do a triathlon popped into my head.  I found one that involved running around a medieval Gothic castle.  Cool!

Deciding to take up this sport in Poland provided some very unique challenges, but in some ways they were very beneficial.

I was a triathlon island.  Triathlon is a virtually unknown sport in Poland.  There were only a few events each year in the whole country.  If there were triathlon clubs, they were usually for kids, and it would be in Polish.  I was still trying to master basic phrases, so the specialized vocabulary would have killed me.  (I did learn a lot of these words over time, but all the bike parts still mystify me.)

And so the research and learning began.  I read Joe Friel's Training Bible and the Pose Triathlon book.  I watched the Total Immersion DVD.  I read all sorts of forums, like Slowtwitch and Beginner Triathlete.  I joined Rock Star Triathlete Academy.  I became an information sponge.

When we moved back to the US, I was so excited to find a triathlon club near me.  Now I'm able to ask questions and interact with club members, my bike shop guys, and people at races.  But I'm also glad that I did so much research on my own because I think it has made me a lot smarter about my training, equipment, nutrition, and racing.

So if you are a triathlon island, I would highly recommend finding an online club where you can get information and ask questions.  For me, Rock Star was awesome.  They cover all the basic how-to's (usually with videos) and you can ask questions in the forum.  You get answers from one of the coaches, not hundreds of opinions (see my post about choices to explain why more ≠ better).

Even if you aren't a triathlon island, feel free to ask questions or request content in the comments section.  Thanks!
Posted by AP at 4:52 PM No comments:

The Paradox of Choice

I realize that it may seem odd to talk about a book (especially one that has nothing to do with triathlon), but I think there are some applicable lessons here. 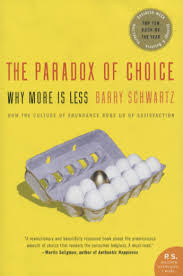 The Paradox of Choice:  Why More is Less by Barry Schwartz

I first heard about this book when I watched the related TED Talks video.  His general thesis is that more choices ultimately leave us less satisfied because we take on more burden in making a choice when there are so many options available.

He defines two types of people:  maximizers and satisficers.  Maximizers want "the best", whereas satisficers want "good enough."  It is important to note that satisficers can have high standards, but they still accept that there can be more than one correct choice.

Why do I bring this up, especially as my first post?  Because I am hoping this blog can provide some help to new triathletes as an example of what I do/own/eat/avoid, etc.  The choices involved in every single aspect of the sport are mind boggling.

Of course, you and I are not the same.  So I'll explain my reasoning in hopes that you can determine that a) this will work for you too, b) this won't work for you, or c) it might be worth trying.  I am by no means an expert, I'm just presenting myself as an example.

If you are a maximizer and you want to spend hours doing research on the internet about every individual detail, you've found the right sport.  Surf away.

So when making choices, I found it helps to consider the following:

1.  What do I consider "good enough"?  What is the intent for this choice?
2.  Are there other factors that will help minimize the number of choices?
3.  What is the "cost" of making a wrong choice?  If it is low, just pick something.

As the author points out, people are happier with their choices when they were constrained because then it wasn't their fault.  He uses the example of jeans; when there was only one kind of jeans, it wasn't your fault that they didn't fit perfectly because that's all they had.  Now, if you can't find perfect jeans, you'll always be thinking that there was a better choice available and you won't appreciate the great jeans you already own.

So put constraints on yourself and save your energy for training!
Posted by AP at 4:59 AM No comments:

Email ThisBlogThis!Share to TwitterShare to FacebookShare to Pinterest
Labels: Choices

So I'm still in the development stages, so check back again soon!

If you have questions/requests/constructive ideas, please add a comment.