Thanks to the generosity of the Timex Multisport Team sponsors, I've donated $500 to Team RWB.


I just finished up my weekend at our training camp in East Rutherford, New Jersey -- the best way to sum up this whole experience is "WOW!" 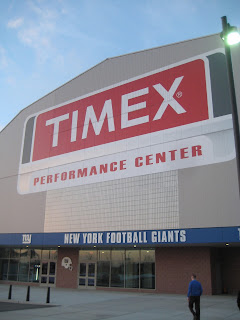 I met people from all over who have accomplished amazing things, both on and off the race course. We got to see and demo the newest offerings from Timex, Quintana Roo, Blue Seventy, and Shimano. The cafeteria at the Timex Performance Center served up three delicious, healthy meals a day. I did a lactate threshold test with the Korey Stringer Institute that required the always perilous task of drawing blood. But I came away from this weekend with the knowledge, contacts, and motivation to power me through the whole season.

I joke that I started in this sport as a "Triathlon Island"...all by myself. This weekend was like "Triathlon Heaven." So to all my teammates and the Team Sports management crew, thank you!

I was so honored to be named a part of the Timex Multisport Team for 2013! So right now I'm in New Jersey for our training camp at the Meadowlands. This will be a great opportunity to meet lots of new people and learn all about the products from our sponsors.

Once our apartment has internet access, I'll post more info!
Posted by AP at 3:20 PM No comments:

Today marks three weeks in Germany. And in my quest to figure out how to train properly, I have been to 4 different pools so far. I've learned inportant things, like the difference between "freibad" (outdoor) and "hallenbad" (indoor) pools, as well as how to navigate the locker rooms. I was assuming that the pools would be similar to the ones in Poland. I was incorrect.

I went to pool #1 on the first Sunday here. I was pretty pumped...it was the closest one and had a 50m pool.  So after a 2+ mile walk, I get there to find that the 50m pool is roped into two 25m sections to allow diving, meaning that there isn't even a wall on the far side. And the shallower section is filled with small children, so it was like swimming in a minefield. After swimming about 500m, I trudged home, discouraged.

Pool #2 involved taking the post shuttle bus to another kaserne and then walking about a kilometer. Except I got lost, so it wound up taking about 45 minutes to get there. But once I did, the front desk lady was very helpful, and the pool itself is pretty good. At least this one had lane markers!

Pool #3 required me to take a taxi. Not that it was far, but it was a bit long to walk and would have involved about 50 minutes on the bus. Also a nice facility, but their lane setup was a bit bizarre. They had double-width lanes, meaning that there was a legitimate passing lane in the center. Unfortunately, there were still people doing the breaststroke in the "schnellbahn."  Breast stroke seems to be the default method of swimming here.

I drove to pool #4, now that I have a car. There were basically no lane markers here. At one point, there were so many people in our half of the pool that I had to wedge myself between two other swimmers and had to repeatedly avoid head-on collisions with one lady doing a stroke I can only describe as "backwards flail." I cannot tell you how many times I considered cutting this workout short, but I ultimately finished.

On Monday, I'm going to swim with a local tri club, who has lanes reserved in the evenings. I am really hoping that this will be a better situation...but stay tuned.
Posted by AP at 9:12 AM No comments: